Science does not speak

Nowadays, science is more popular than ever. But is that really so? What do people think of when they hear the word "science"? Sometimes, one could get the impression that science is a person, akin to an oracle or even a god, that tells us facts about the world at an ever increasing pace.

"Science says that using a plumbus is bad for you."

Science says this, science says that. But who exactly is talking? Can the scientific method, an abstract concept of how to analyze the world, utter words? No, it cannot. At this point, the reader of this text has every right to think that I am a pedant who just doesn't understand the concept of colloquial language. Of course what is meant is that one or more scientists applied the scientific method and arrived at that conclusion, but that is a needlessly wordy way to phrase it. That is why we just write "science says".

The phrase "science says" is often found at the intersection of news and science. Usually, a journalist stumbles across a scientific work and tries to bring its contents to his readers. A noble cause for sure. Unfortunately, most journalists are not equipped with the scientific and didactic aptitude to overcome this difficult task. Ingesting dry, technical works and turning them into something that an ordinary person can understand is one of the highest intellectual abilities known to mankind. Especially if it's done across many different and dissimilar scientific fields. It requires both didactic expertise and deep knowledge of the subject matter. Professors and pedagogical experts regularly fail at it alike. It is therefore no insult to say that journalists are by and large simply terrible at it. They are confused by the technical jargon and content of the works. They compress the works until they are no longer recognizable. They distort and omit crucial facts and details - be it by accident or on purpose. The article must be entertaining and capture the reader's attention. Seeing the world through the news is like seeing the world through stained glass. Colorful, blurry fragments of truth make up an image that has little to do with the reality that lies behind it.

Old drivers of confusion are perpetuated by modern newspapers. It is no longer god who tells us things, it's science. We have replaced one deity for another, but the thing that remains unchanged is belief despite absence of evidence. 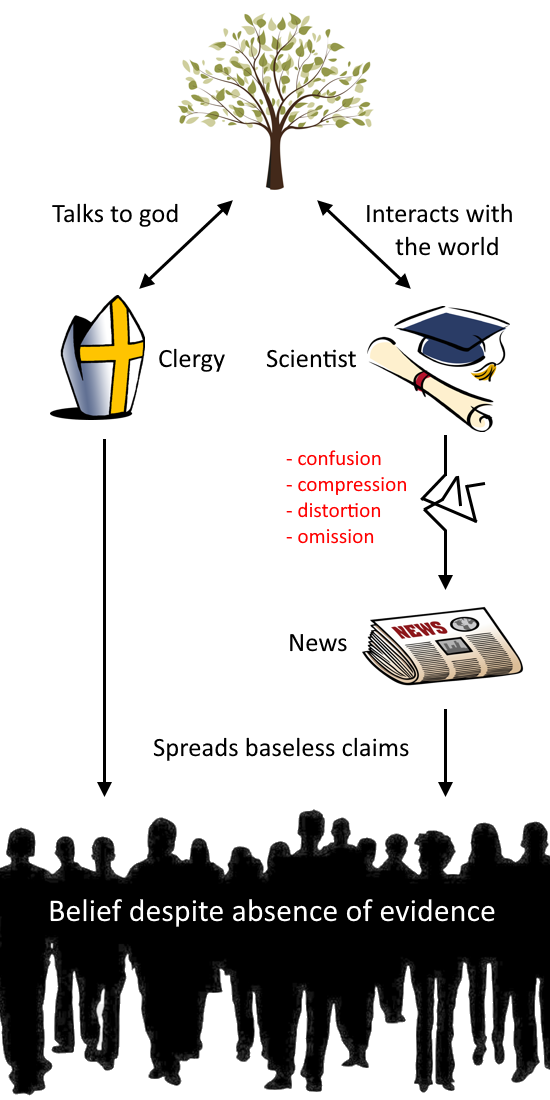 The distinction between what science is and what scientists say is of great importance. This is not just a linguistic game, the term "science says" is very dangerous. It is dangerous because we make the words of humans absolute truth. A scientist is a human being with wants and desires. A scientist may be tempted to distort the truth to have his article published in a prestigious journal. He is beholden to a university or company. He is deeply embedded in a social structure. He has career goals and social responsibilities. His articles are the base of new legislation. He may be pressured into producing fake results by large corporations. His work depends on grants from various institutions. Especially in politically loaded fields, the incentives are heavily stacked against truthful research. The term "science says" omits necessary details, such as: Who conducted the research? What research was done? What other research does it refer to? Where is the data? Has this research been reviewed and reproduced and if yes, by whom? These questions are fundamental and without much of this information, there is no science, only unsubstantiated claims. Omitting these facts is simply dishonest. And without complete transparency, science starts looking a whole lot like religion.

Let there be light

The only thing that separates a theocracy from a modern scientific society is epistemological hygiene. Epistemological hygiene means that every single person thinks deeply and critically about what they know, why they know it and where this knowledge comes from. You can abolish all the traditional religions and still have a theocracy if a small elite decides what's right using closely guarded data that is publicly unavailable. It may not be called religion but it is identical to religion.

Relentless doubt is absolutely crucial to prevent your worldview from being poisoned by untruths. If you think that something is not right, investigate and speak up! Either the thing isn't right, so you were correct in pointing it out. Or else it is right and then you learn why it is so. And if you are reprimanded for raising valid concerns, you are subject to an unhealthy structure that needs to be repaired or dismantled. Be humble but vigilant. The only way for scientific knowledge to spread is through extensive documentation of theory and methodology and through the release of raw data. In the absence of these things, there is only belief.

If there is one observation to be made about human history, it is that what used to be common knowledge is fraught with errors. What makes us so sure that our time is different? I am sure that everyone who lives in today's society, too, believes in many falsehoods whose curse will only be lifted in the coming decades, centuries or even millenia. And just like we smile about the foolish beliefs of our ancestors, so too will our descendants smile about our foolish beliefs. Looking at it from this vantage point should instill some intellectual humility in all of us.

The physical reality cares neither about feelings nor about scientific consensus. We should be tolerant of those who doubt, lest we be proven fools ourselves down the line. Doubt is a virtue. If anything is certain, then it is that absolute certainty does not exist.